This weekend basic conditions on SW. Strongest was VOTN on 6275 kHz. One new Russian MW-pirate was identified (my 3rd). Also Energy Power AM from Dublin, Ireland (which I visited in December 2007) was nice to hear on 1386 kHz after a few months. 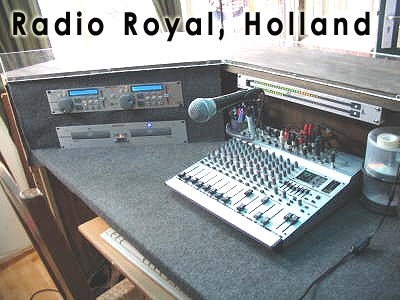 Many stations on the air on SW with Shadowman as the strongest. During the day I tried to phone Greek MW-pirates (see below under next headline).

Here a few Greek pirate-loggings from the past week. Some music-pirates were on the air above 1620 kHz . They gave GSM-numbers for SMS and and I phoned them. (Unfortunately I have quite bad local background-noise on MW just now).
My other identified Greeks are here (with some transmitter photos). 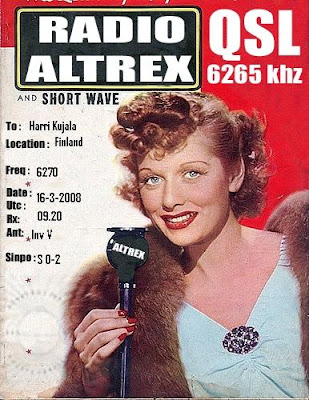 I made some updates to my mainpage www.harrikujala.tk. There are photo-series of transmitters of Radio 98 and Radio Xenos (both from Volos, Greece) and Radio Balkan, Beograd, Serbia.
On SW strongest of the day was Orion Radio and Radio Lowland. Not so many stations on the air.
Playback was very strong on 6882 kHz but Spider (Greece) and Barretina (Spain) were weak. 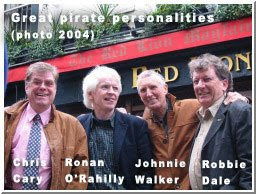 One legendary pirate radio personality for me has been Chris Cary. He died in Tenerife on 29.2.2008, still working on some radio projects.
First time I met his name in 1980-81 on Dublin-based pirate Radio Nova, the greatest land-based pirate ever been!! I remember very well when I accidentally found their big AM-signal here in Finland on 843 kHz (50 kW) on November 1981 ! Later I heard Nova also on FM 88.1 MHz (mp3-clip).
I followed happenings around Radio Nova very closely at those times. I have dozens of newsaper-cuttings of Nova-raids, closures, demonstrations, jammings etc. - also from Radio Sunshine, Dublin which Chris was building up with Robbie Dale.
Later I realized Chris was also involved with Radio Luxembough and offshore pirates, Radio Caroline and Radio Northsea.
The most interesting part of this is Chris' legal, local radio, Buzz FM, Birmigham 102.4 MHz in the beginning of 90's.
I heard his small FM-station here in Finland on FM on summer 1993. I sent a report to Buzz but I never got a reply. Ten years later, year 2003, I managed to find out Chris' e-mail and I sent him my mp3-clip. He kindly confirmed my recording. 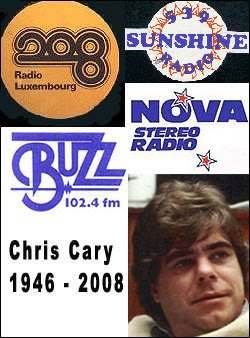 Buzz FM was not long lived because they were granted only 50 Watts power, but Chris stated me that when I heard his station before the closure, the power was closer to 1 kW. So, no wonder of the nice signal here. Here is my nice sounding clip of Buzz FM received at my home on 102.4 MHz (e-skip via ionosphare, summer 1993)!
Any ideas who is the DJ??

So, I just realized I have QSL from all stations where Chris was involved: Luxy, Caroline, Northsea, Nova, Sunshine and Buzz FM (despite his latest satellite- or LW-projects)!!
(All photos here taken from www.chriscary.com)
Lähettänyt Harri Kujala klo 3/04/2008 10:42:00 pm 1 comment:

I have a kind and quick reply from new quality-station Radio PlayBack International. 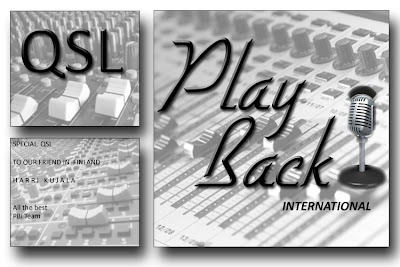 Really interesting venture on SW. They enclosed QSL and very detailed history of radio broadcasting starting from Einstein and Marconi and ending to PlayBack.
In the reply they stated that the station in not located in Italy (We must remember that it is a pirate station - and we are not supposed to know their closer location. So, it is broadcasting from the "island of nowhere", as stated in their jingle).
They promised photos of the equipment and I will publish them here right away!! Very interesting.
Listen PlayBack-jingle in studio-quality! 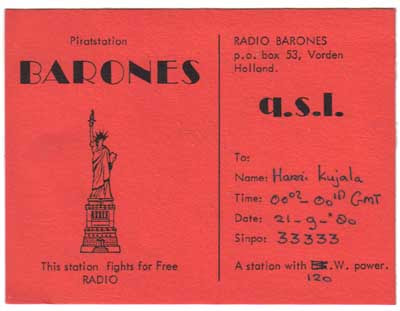 1655 kHz - Radio Barones, Holland, I phoned to Baro since long time and he played me good music, Brown Sugar and Beds Are Burning. Thanks! Signal was good but unluckily there were Radio James Bond giving slight interference - 23.00- (O=2-4)
Here is my Barones-QSL from 1980. Click >>

1656 kHz - Radio James Bond, North Holland. Sometimes stations from Central- and North Holland are on the air on same frequency at the same time - they do not hear each other so well. James Bond has also big power, around 1 kW - 23.15- (O=0-3)