That would be a test-weekend for pirates from all over the world to broadcast on High Frequencies 10 - 28 MHz (mostly on 15-22 MHz) !! Still much time for preparing things.
New station from BULGARIA just joint to broadcast: Free Radio Bulgaria (F.R.B. Service) will be on the air on 21.490 MHz with 100 W. More info later!

So, I hope also pirate stations from USA and Canada will join this weekend trying to reach Europe and also Asia/Oceania !!
I think that the stations should prefere frequencies between 21.450 - 21.550 MHz and 15.000 - 15.100 MHz, but of course anything goes.

There seems to have been visitors to my blog from all over the world. So, let's hope that we will have new listeners from South America and Asia etc. Big antennas and receivers NOT needed for very long skips.

3) European NIGHT 22.00 - 24.00 UTC from North America to Asia/Oceania. NEW!
I have several new stations participating this coming weekend, so, it will be very interesting.
The conditions has came down a little bitduring past weeks. You can see radio-amateurs real-time-QSO's on 28 MHz (10 mb) here: 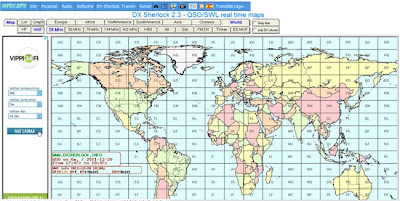 FOR PIRATES: If you want to join already, put me e-mail:
(harriku****dnainternet.net) - **** = @ .
(I will publish a detailed station-lists only very close to this weekend).

I did not hear Radar myself but here below is acknowledgement-card for me for arranging this test! Thank you !
- Nice job and succesfull test! Wellcome to 48 mb later! 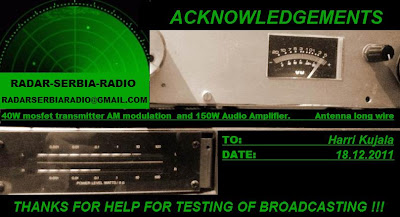 Small Serbian pirate station, Radar Serbia Radio, will have test broadcast to Europe on Saturday 17th December 2011! Station will be on the air from 20.00 - 23.00 UTC !! Frequency is very exceptional: 2023 kHz!! The power is only 40 Watts AM. Music will be rock.
Real challenge to hear !

Radar Serbia Radio is planning to start on 48 mb !!! Then it would be the first international SW-station from Serbia (Radar is also using frequencies between 1600 - 1800 kHz, but not often because that band is overcrowded in SE Europe)!

Here is youtube-video of this station brodcasting techno on 2023 kHz!
E-mail to the station: radarserbiaradio@gmail.com

Below here is a photo of station's first 40 W-transmitter. There is a bigger under construction! It is mosfet-transmitter which is very exceptional (used also by Radio Texas in Serbia with bigger power). Click: 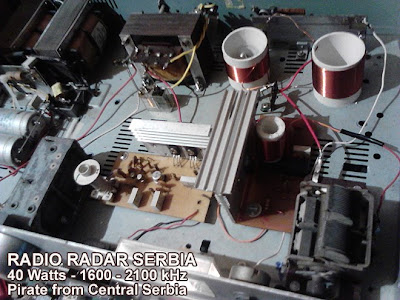 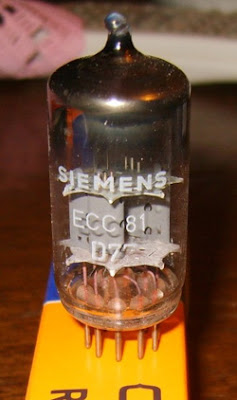 My friend in Serbia is selling tubes worldwide for transmitters and amps. Click the tube-link below for more info:

You can also ask for other tubes. He started collecting tubes 25 years ago and has now 25 000 pieces, including 10 000 high quality used tubes. Some of them are in original packages (from Holland and USA forexample). More information of the collection: www.tubes.rs.

You ask more to buy with e-mail nostubes@gmail.com 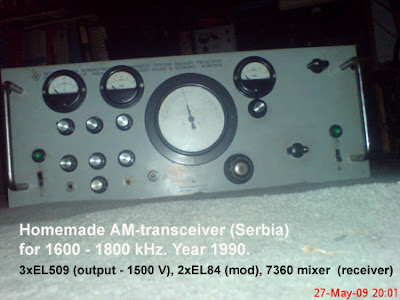 And here is a link for 20 years old schema for pirate AM-transmitter with PL509-tube. He used pirate-name "Columbia" from Pancevo (in Serbia, near Belgrade).
.