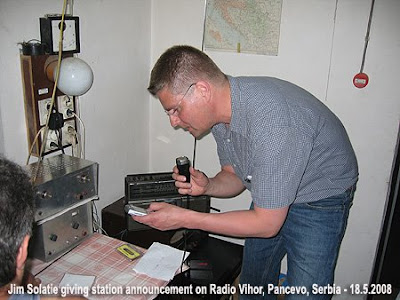 On the 18.5.2008 we had broadcast from Serbian AM-pirate station on 1680 kHz (and lower frq's). It was from Radio Vihor's site from Pancevo which we visited to be on the air. It was the first real international broadcast from Serbia with contact address (Radio Bluestar's P.O.Box in Zwolle - thanks for Bluestar!!!).
We had 12 reports from these countries: Finland, Latvia, Czech, Austria, Germany, Belgium and Holland.
The AM-conditions on 18.5.2008 was very poor. The noise from the thurderstrom were very bad and strong. It covered audio-signals constantly and badly - everybody reported this same info. Also there were unluckily Dutch stations on the frequencies where we informed to be on the air (Dutches are rarely on 1660 kHz or over). New broadcast made on 31.5.2008 (no larger info made this time).

I just made and mailed Radio Vihor QSL's to Serbia. The operator will sign the cards and mail them further to DX-ers. The card is color-photo-QSL where the operator is adjusting the transmitter.
I think we will have a new international broadcast in September or October - so there will be a new chance to hear and have QSL from Serbian pirate!
I will publish photos and videos here later as we visited 4 AM-pirates during Serbian Tour in May.
Just now I am very buzy at work because I am building up new (legal) FM-station to Turku - and re-formatting two other.
Lähettänyt Harri Kujala klo 7/17/2008 11:09:00 pm 2 comments: