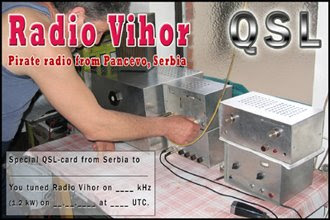 All who sent reception report of Radio Vihor's international broadcasts in May have now received their Special-QSL-cards by post!!
They have been posted from Serbia with operator's signature.
You can see the QSL here >>

Radio Vihor will be on the air internationally again on September or October when AM-season begins again after summer. Then everybody has a new change to get pirate-QSL from Serbia.

Unfortunately I am very buzy at work, so I have not had time to put my pirate-photos online - but I will do it sooner or later!

Another Serbian MW-pirate Radio Texas (from Vrsac, East Serbia) has built new PLL-transmitter with 120 W output for MW (around 1700 kHz). 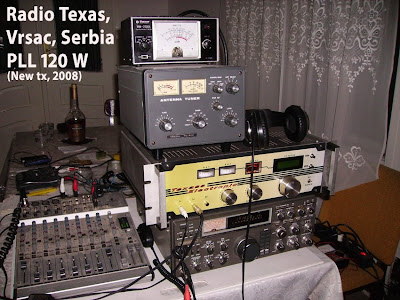 Looks very professional, clean and cool! The station plans to put 1 kW on air later this year by using this tx as a driver!
Radio Texas will also test internationally during this autumn. I will inform about the broadcasts later in the forums!
CLICK THE PHOTO >>>
Lähettänyt Harri Kujala klo 8/13/2008 09:58:00 pm No comments: