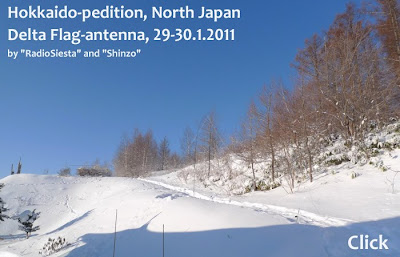 Alexandr - ULX2 in Kiev, Ukraine made a few observations on HF-frequencies with nice signals!

Wellknown DXer Zacharias Liangas made perfect monitoring in Thessaloniki, Greece during the Japan-weekend! He heard many stations.

15008.9 - Old Time Radio on was very poor on 08xx though several times
could be heard marginally.

15074.9 - Cupid Radio. Duno if he was transmitting for the occasion but he
was quite well audible audible as with the previous tuimes I logged him. He supposedly started on 0900 but i tuned in, on 0912 with ID and old song, and signal level S3 max. 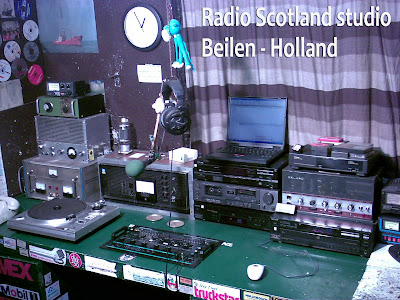 Listener was "Tanukiou" in Kumamoto, South Japan with Sony AN-12 active antenna !

More observations from other Japanese listeners might come tomorrow or later. 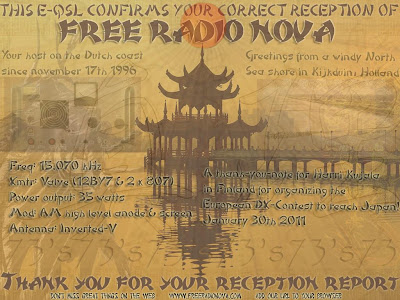 I got this Special-QSL for Japan Contest from Radio Nova, Holland.
(Add: Nova was not received in Japan. This is sample-QSL for this project)

Not good conditions on Sunday

Sunday 30.1.2011 gave us poor conditions on higher frequencies, but of course not much expected at this time of the year.

NEXT TIME HF-TEST DAY TO JAPAN in April/May!
Japanese are very keen on to hear European pirates because it is real DX-ing (real Distant X-stations)!! We also try to make real-time chatting with them.

- Old Time Radio had better Saturday (in USA!) than Sunday.

- Channel Z Radio from USA was well audible in USA and Canada on Saturday evening on 11.428 MHz but no sign in Europe or Japan.

- Cupid Radio from Holland had big signal in Finland (with deep fading) on 15.075 MHz. Cupid Radio was not listed on the schedule.
Here is my recording of Cupid Radio, 15.075 at 09.36 UTC Audio-clip
Another audio-clip when Cupid is fading out from HiFi to zero (9 kHz bandwidht).

About Borderhunter:
this morning frequency 15.810 MHz was occupied by Trans World Radio, so it was not possible to hear Borderhunter in Japan. Borderhunter moved 15.260 MHz but I could't pass the info further.
Better luck next time.

Radio Borderhunter will be on the air in Sunday morning 04-05 UTC on 15.810 MHz!!!!
250 Watts AM. Location is Belgium.
borderhunterradio@hotmail.com

Read the Comments below....

Translate this with Google-translator:
http://6103.teacup.com/akage/bbs/95555

Shoreline AM from Holland was clear in Finland on 14.375 MHz on
Saturday morning.

I hope to get more reports this evening - and tomorrow of course !

- LIST OF STATIONS ON THE AIR -
Note new station on the list below!
Last minute changes are in blue-text below!

CHAT for everybody during broadcasting times:
http://www.easyshopdiscountzone.com/radio/pirate/chat.html

8) Bluestar Radio / Location: Holland web
Bluestar will be on the air on 11.485 khz or 14.500 MHz. No more info, but
please check the frequencies on Saturday and Sunday mornings.
bluestarradio@live.nl

European SW-pirates might never been received in Japan, so far I know. Or at least it is very very rare!

I am arranging test weekend for European pirates to try to reach Japan on Short Wave! 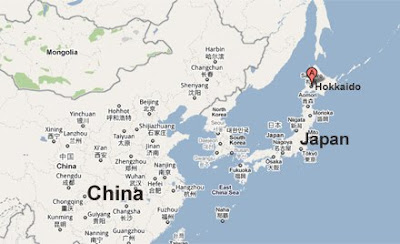 Japanese DXers with nicknames "Shinzo" and "RadioSiesta" will have DX-pedition in Hokkaido, North Japan.

It will be from Saturday morning 29th January till Sunday evening 30th January.

They will monitor given HF-frequencies on the following times:

I invite all European SW-stations to broadcast on these time-slots and try to reach Japan!

Please contact me and give me your:
1) Station-name
2) Frequency or frequencies
3) Times of broadcasting
4) Power (about), AM or USB/LSB
5) Country

This information will spread over whole Japan DX-community. So there might be dozens of listeners in Japan and Asia! I hope listeners in Canada and USA will also monitor the frequencies - and in Europe of course!

I WILL LIST ALL STATIONS HERE who will try to reach Japan.

If you would like to broadcast on some of these times between 9-15 MHz send me e-mail to: harriku(-at-)dnainternet.net

- LIST OF STATIONS ON THE AIR -
ALL NAMES of the stations will be published 2-4 days before broadcast!