Female-pirate-QSL after 33 years of listening!! 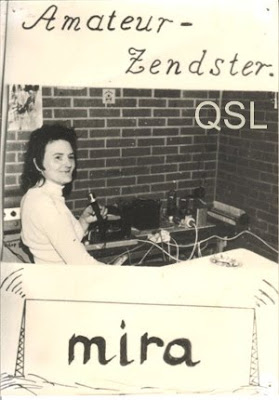 When I was school-boy during 70's I tuned and reported hundreds of pirate stations on SW and MW. I sent letters especially to Dutch MW-pirates and got many nice replies (listed here).

A few weeks ago I had interesting e-mail-contact from Zender Ricardo from Oude Pekela, NE Holland. He is ex-pirate operator from the 70's. He has built own web-page of many pirates from that time and he also found my page of Dutch stations! Ricardo's nice and rare photos can be found here (many lady-pirate-photos!).

One very interesting point is that he recognized one of my old recordings (1976) from my page. .
He identified this to be female pirate Zendster Mira, also from Oude Pekela (my recording 1976)!!! 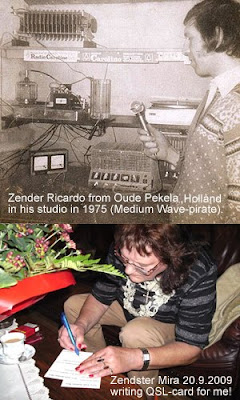 It was also nice surprise that this lady is alive and kicking very well !!

So, after 33 years of my listening I got QSL-card from this lady-pirate! Zender Ricardo invited her to his home. She listened her voice from my internet page - and wrote me QSL - after 33 years of listening !! I got it posted in letter)!
Here is the photo of that QSL-writing! >>