Let's name it name now "Global Pirate HF-Weekend". A test-weekend for pirates from all over the world to broadcast on High Frequencies 10 - 28 MHz (mostly on 15-22 MHz) !!

So, I hope also pirate stations from USA and Canada will join this weekend!!
I think that the stations should prefere 21-22 MHz, which give best skips faraway, but 15 MHz seems to work also (worse below this).

Nowdays HF-signals skips easier far away between the continents.


PHOTO FROM HOLLAND
Here below is a photo of one Dutch pirate station's SW-transmitter. It is 65 Watts AM.
This station will participate in January to HF-Weekend first time on 19 mb. (Station-name revelealed later in January). CLICK for bigger view!! 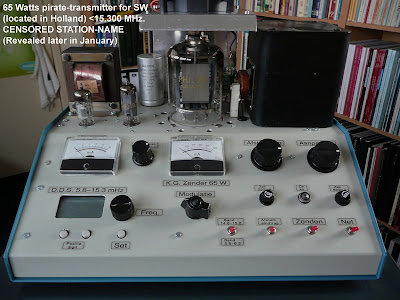 Looking forward to listening to some of the stations next weekend. Let's hope the reception is good here in Germany.